Meet the musicians who make the music that makes our wonderful concerts! 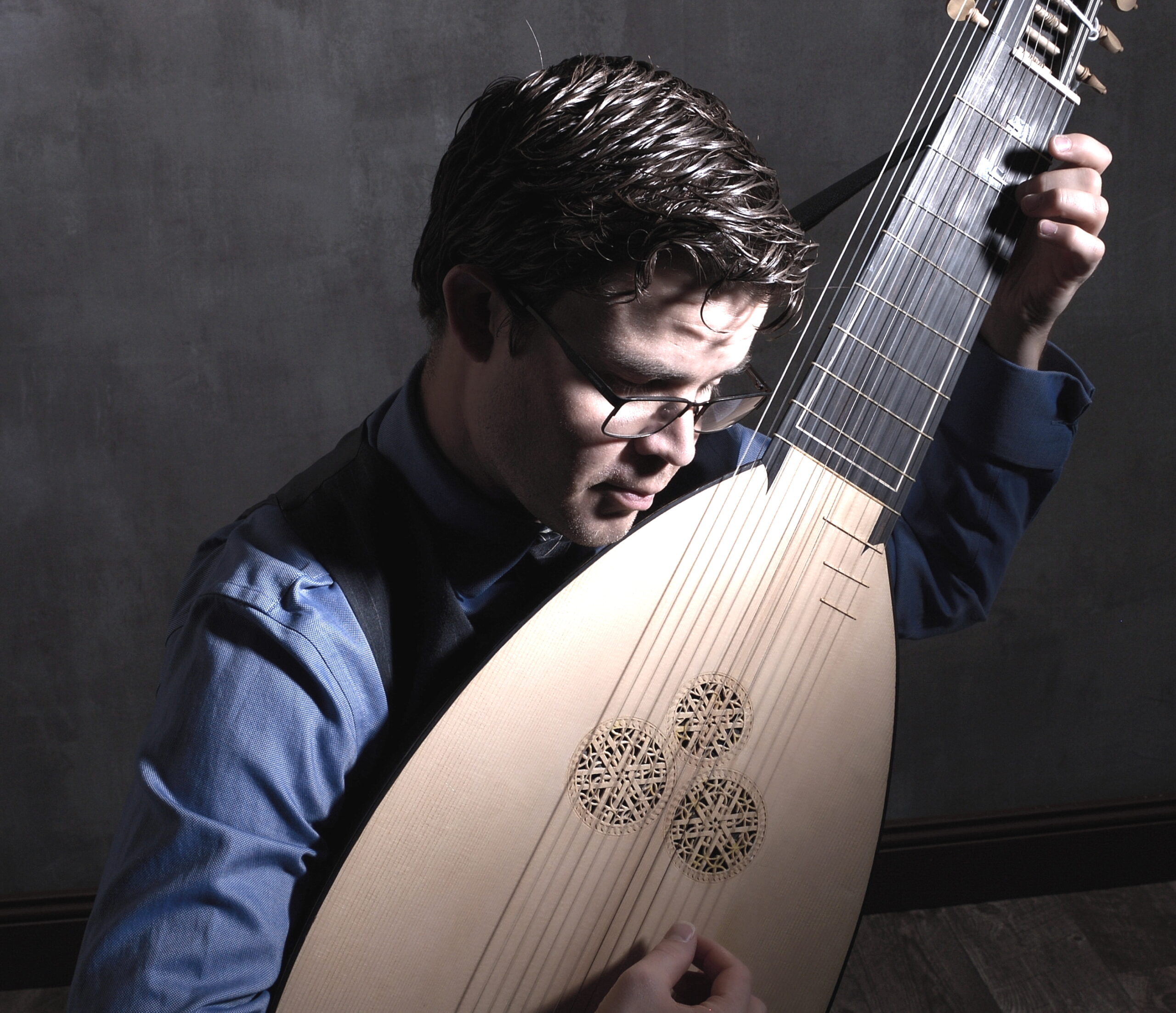 grew up in rural Montana. He began teaching himself rock guitar at age 13 and by his junior year of high school had begun studying classical guitar. He currently lives in Westminster, Colorado where he is an active performer, teacher and therapeutic musician.

One of Keith’s passions is performing on early plucked instruments including the lute, Baroque guitar, and theorbo. He has played for multiple groups across the front range including the Boulder Bach Festival and the University of Northern Colorado’s Ursa Consort. He has had the pleasure of playing basso continuo for opera productions with the University of Colorado, the San Francisco Conservatory, the American Bach Soloists Academy, the Amherst Early Music Academy, and the University of Northern Colorado. Keith received his Bachelors in Classical Guitar Performance in 2006 from the Lamont School of Music at the University of Denver. While there he studied with Ricardo Iznaola, and Jonathan Leathwood. He received his Masters of Music from the San Francisco Conservatory in 2015 with an emphasis in Historical Performance, studying under Richard Savino and Marc Teicholz. Keith graduated in 2018 from the University of Colorado (CU) with a Doctorate of Musical Arts. While at CU he studied 10-string guitar with Nicolò Spera. 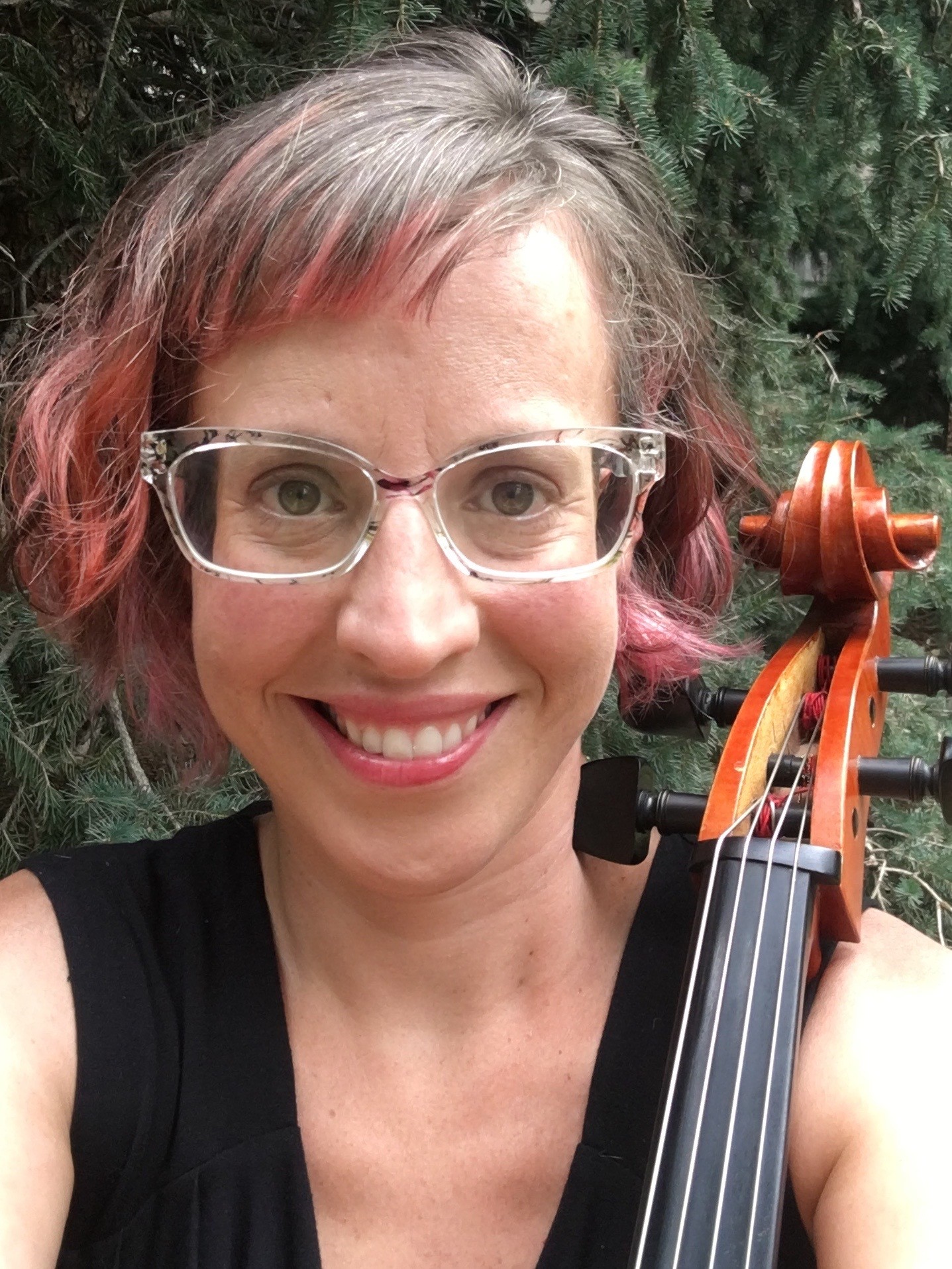 has played the cello and viola da gamba across the United States, Australia, and China. She studied the cello at Oberlin Conservatory with Peter Rejto, and then at the Sydney Conservatorium with Georg Pederson, where she performed in the Opera House with the Sydney Symphony and as a member of the Sydney Sinfonia, the training orchestra of the Symphony. After returning from Australia, she founded, directed, and taught the string orchestra program at KIPP DC: AIM Academy, a charter school in the Anacostia neighborhood of DC, at the time, grades 5-8. Sarah received her last degree, a Doctorate of Musical Arts in cello performance, at Stony Brook under renowned cellist Colin Carr. From 2010 to 2011, she was an assistant professor of cello performance and pedagogy at Montana State University, teaching music theory and string pedagogy to future music educators, and founded Second Strings, an orchestra based in DC of adult amateur string players, as well as Hill Harmony, an organization providing string classes and instruments to public schools in SE DC. Since 2015 Sarah has lived, performed, and taught in Colorado. She lives in Golden with her partner Keith Bradley, their two daughters, three cats, and a parakeet named birdie. 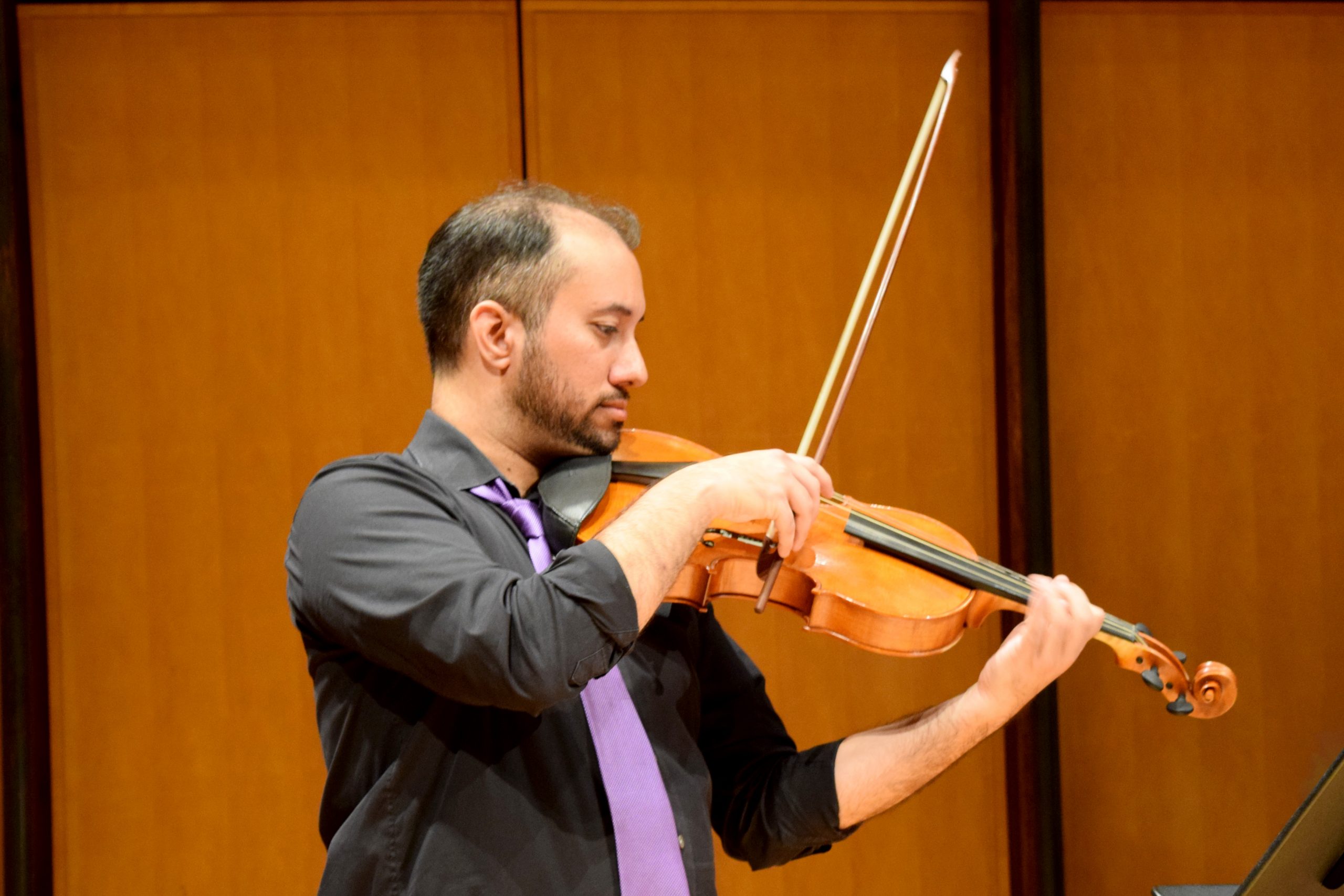 is a South Asian-American violist and Assistant Professor of Viola and director of the UNCommon Ensemble at the University of Northern Colorado School of Music. He is a performer, scholar, teaching-artist, and an advocate for diversity and equity, whose work focuses on the performance practice of music of the last five centuries. Equally at home on both modern and historical violas, Chalasani has been featured as a soloist in repertoire ranging from Telemann and Graun to Walton and Feldman. An avid supporter of contemporary music, Chalasani was the soloist in the US premiere of Vinko Globokar’s chamber-theater piece “Blinde Zeit” with members of the Callithumpian Consort, supervised by the composer. He has also performed with violist-composer Garth Knox, pianist-conductor Stephen Drury, and the Inverted Space Ensemble, coached with composers Brian Ferneyhough (on his “Adagissimo” for string quartet) and Nicole Mitchell, and has collaborated with the Guerrilla Composers Guild and others to actively commission new works for the viola. Chalasani is a founding member of the Northern California based baroque chamber orchestra Sinfonia Spirituosa, and performs frequently on period instruments with ensembles such as American Bach Soloists, Boulder Bach Festival, Pacific MusicWorks, Early Music Vancouver, and the Albany Consort, as well as in chamber music performances of works from the classical and romantic eras on historical instruments. His dissertation research on original viola pedagogy and performance practices of the long 19th century has led to performance collaborations and conference presentations at the Universities of Oxford and Huddersfield (UK), as well as a recording of works by Tchaikovsky and Fuchs made by the Accordes! International Chamber Orchestra released in November 2020. Chalasani was appointed a member of Early Music America’s Inclusion, Diversity, Equity, and Access (IDEA) Task Force in August 2021. A native of Northern California, he has resided in Greeley, CO since 2019 with his wife Ruth Denton. 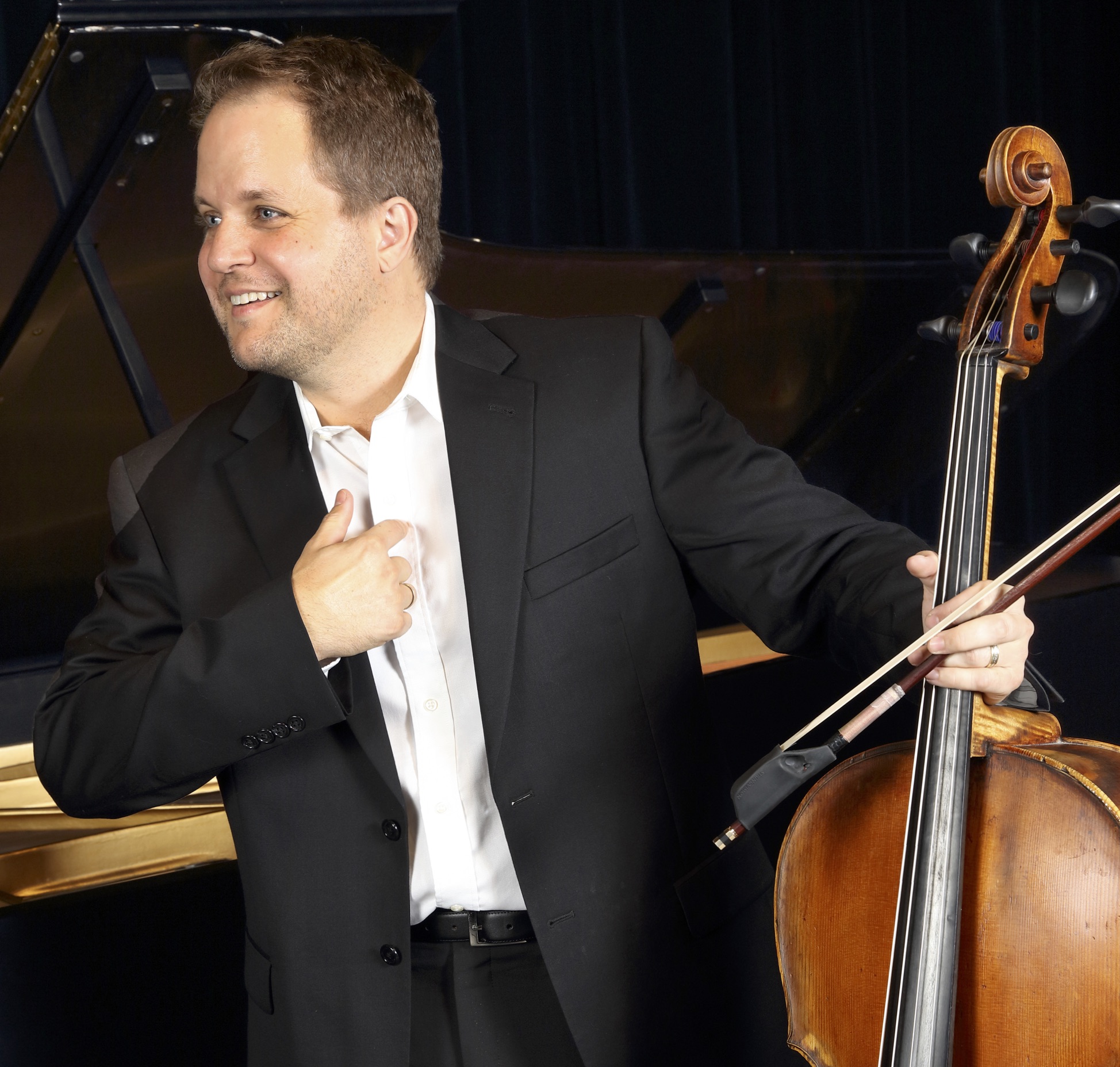 is a cellist and gambist, and has performed in the United Stated, Europe, and Asia. He has appeared as soloist with several orchestras, including the Kaohsuing City Symphony Orchestra in Taiwan. He was also featured in performance on Public Radio’s WXXI “Live from Hochstein” in Rochester NY, and has collaborated with many noted musicians, including Sharon Stanis, Ingrid Matthews, Yumi Hwang-Williams, Theodor Kuchar, Tali Morgulis, and the Russian String Orchestra. A highly versatile musician, he has performed as recitalist, soloist, orchestral principal, and chamber musician.  His repertoire is equally diverse, spanning from 16th century works for gamba to 21st century electroacoustic works for cello.

Mr. Cline teaches at Fort Hays State University in Kansas as Professor of Cello and Bass, where he also serves as Department Chair.  He studied with Alan Harris at the Cleveland Institute of Music and Jim Fittz at the University of Northern Colorado.  Master classes and additional studies were undertaken with Norman Fischer, Gordon Epperson, Anne Epperson, and members of the Cleveland and Julliard String Quartets. 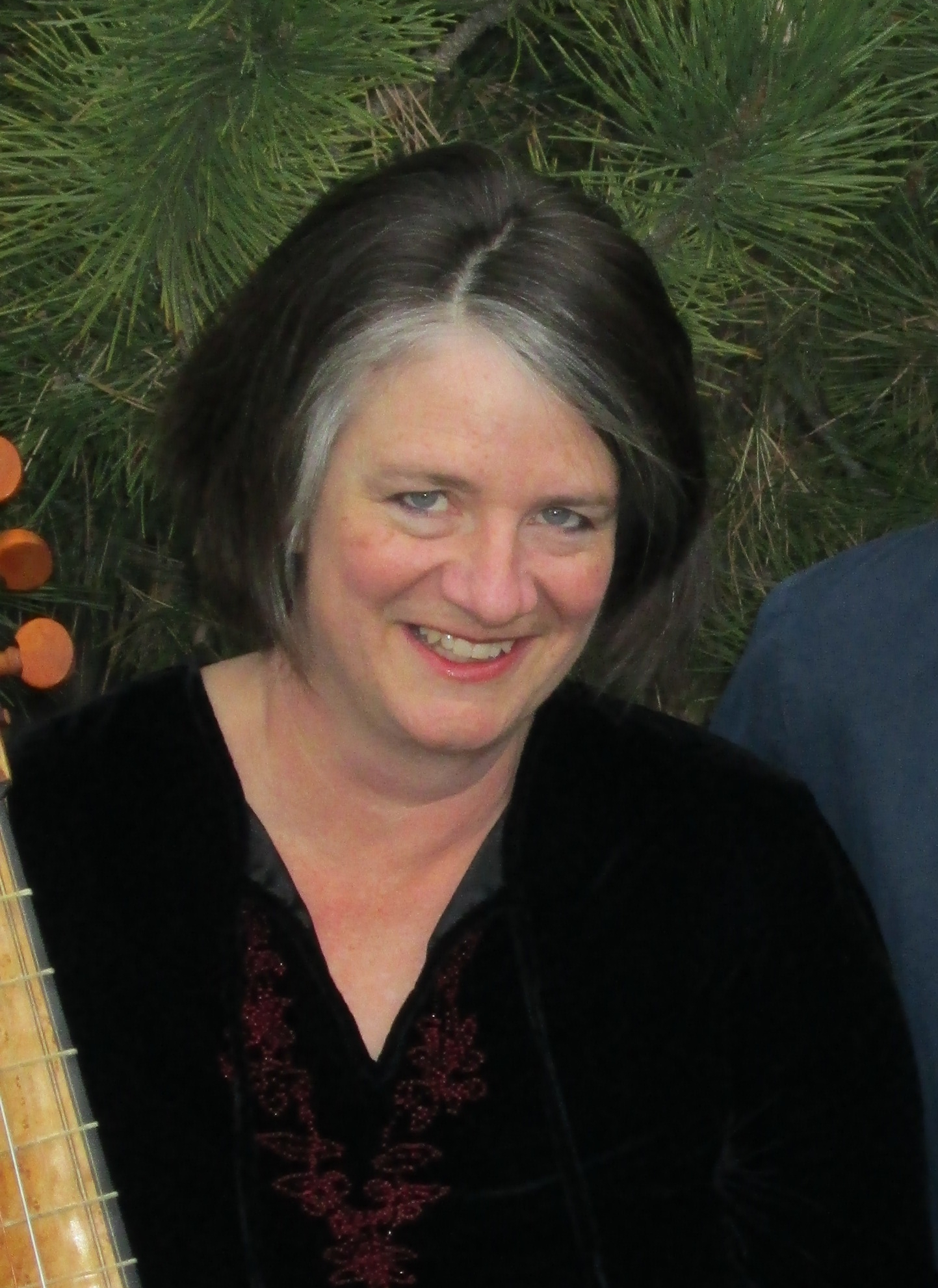 is praised by the Baltimore Sun for her “beguiling musicality.” She is a frequent guest artist with major orchestras and ensembles. Viola da gamba soloist in the Bach St. John Passion with The Cleveland Orchestra at Severance Hall under the direction of Franz Welser-Möst (2017), she has also performed the St. John Passion with The Philadelphia Orchestra, and the Bach St. Matthew Passion with the Minnesota Orchestra under Bach specialist Helmuth Rilling’s direction (solo arias with Ingeborg Danz and Thomas Quastoff). Other performances of the Bach Passions include those in the U.S. with the Colorado, Helena, Richmond and Quad Cities Symphony Orchestras; in Canada with Les Violons du Roy and the Kitchener/Waterloo Symphony; and at numerous Bach Festivals including Oregon, Bethlehem, Boulder and Winter Park (FL). She has appeared on viola da gamba in Bach’s Brandenburg Concerto Number Six with The Cleveland Orchestra, the Baltimore Symphony Orchestra, and at the Boulder Bach Festival.

During the pandemic, touring, recording and concertizing came to a halt. In March 2021, however, live local performances and recording were revived for Ann Marie in a concert with Boulder’s Ars Nova Singers. She joined with frequent collaborator Nicholas Phan in
recording three songs for the ANS “Rebirth” event ( https://youtu.be/D4ywveSasUQ).

Ms. Morgan recently served as interim Director of the CU-College of Music’s Early Music Ensemble, coaching strings, voices, harpsichord, and offering lessons on baroque style to students on modern instruments. She has also served as one of four on the Preliminary Judging Panel for the 2020 Indianapolis International Baroque Competition.

Reviews of her playing on Chris Norman: The Man with the Wooden Flute include:

Ms. Morgan has her own solo viola da gamba album, Among Rosebuds, of French and English repertoire with William Simms and Daniel Rippe, continuo. The J.S. Bach Flute Sonatas: Sonatas from the “Musical Offering” (Joshua Smith) and The Soulful Bach and
Telemann (Olde Friends) feature her on baroque cello. As a result of her fifteen year appointment with Apollo’s Fire: the Cleveland Baroque Orchestra, she can be heard as baroque cellist and violist da gamba on nearly a dozen of that ensemble’s recordings.
Labels upon which one can hear Ms. Morgan perform include AVIE. Centaur, Chandos, Dorian and Naxos. 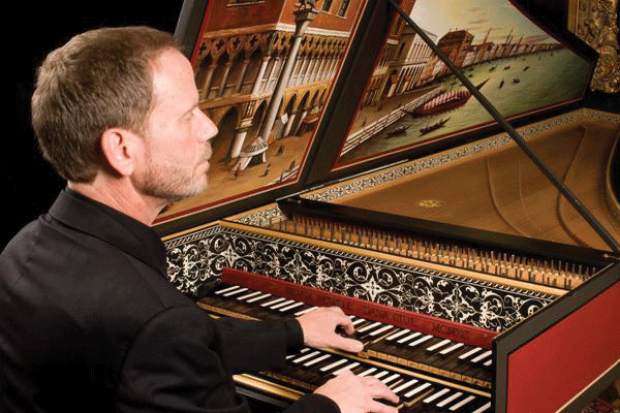 founded the Baroque Chamber Orchestra of Colorado in 2005, and the ensemble quickly garnered acclaim for its “artistic vision, authenticity, and devotion” (Denver Post) under his leadership as Artistic Director and harpsichordist.

Founding the orchestra fulfilled a long-held dream to expand the Denver arts scene to include a professional orchestra devoted to historically inspired performances of music from the 17th and 18th centuries. An active performer as a Baroque keyboard specialist and “early music entrepreneur,” Mr. Nowell was previously co-founder of the early music group Diverse Passions and founder of the Denver Handel Festival. He is a frequent guest artist, collaborator, and soloist, including recent appearances with Cottonwood Music Festival, Wyoming Baroque, Off the Hook Chamber Music Festival, Colorado Music Festival, Pro Musica Colorado, and St. Martin’s Chamber Choir. As an organist he earned Associate certification (AAGO) from the American Guild of Organists and has recorded on the Cygnus label.

Mr. Nowell takes joy in introducing people of all ages and backgrounds to Baroque music and in collaborating with a wide range of artists (such as choreographers, puppeteers, poets, spoken-word artists, and actors) to bring new dimensions to this music. He currently serves on the Board of Directors of Early Music America, with a special focus on education, awards and scholarships, and support for emerging artists. 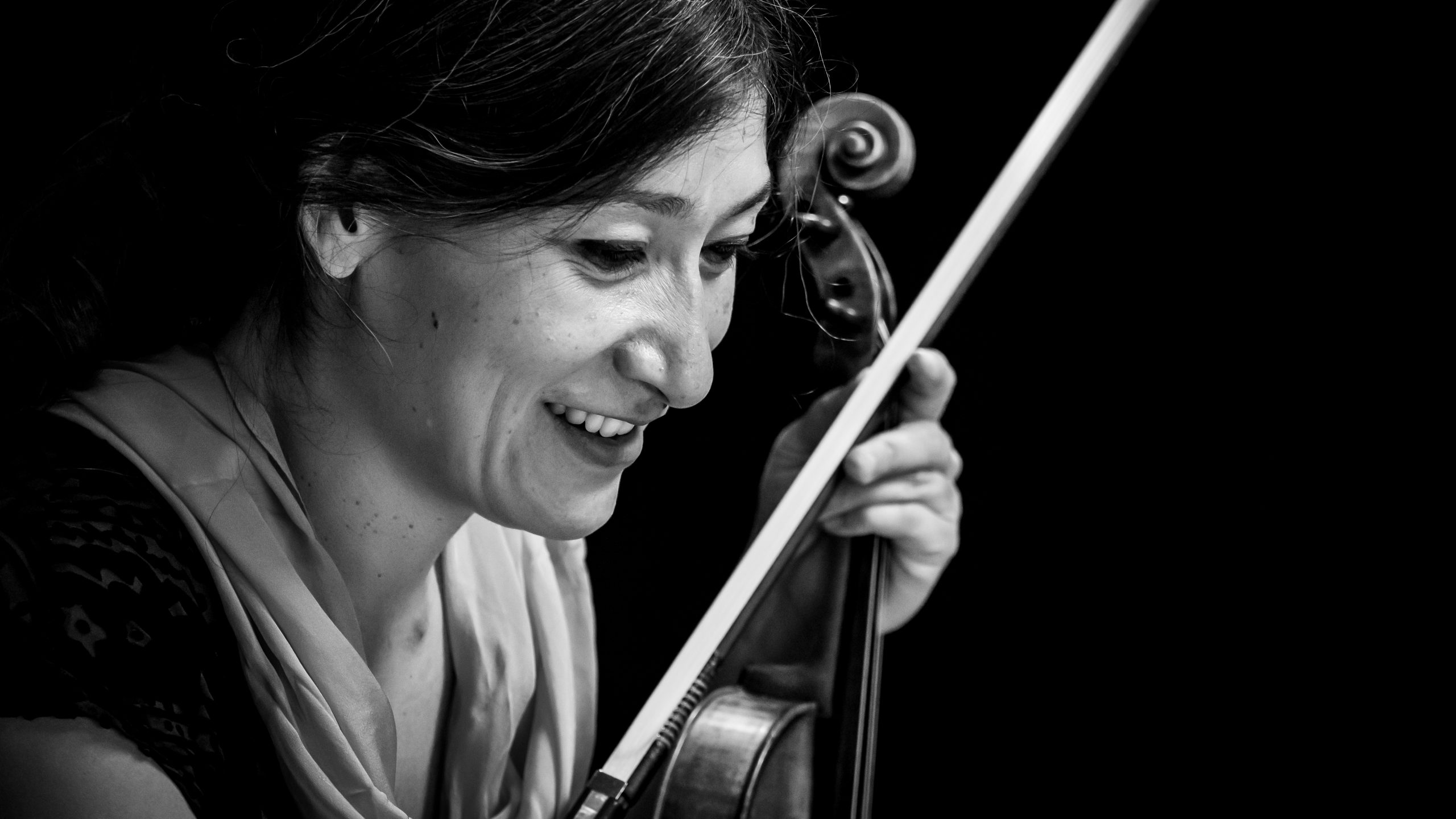 is the second violinist of the internationally renowned Takács Quartet, performing 80 concerts a year worldwide. Acclaimed by the New York Times as a “deeply expressive violinist”, Rhodes has gained recognition as a multi-­‐faceted musician with a distinctive musical voice. She is Associate Professor of Violin, Artist in Residence and Ralph E. and Barbara L. Christoffersen Faculty Fellow at the University of Colorado-­‐Boulder. Rhodes combines her performing career with a passionate commitment to guiding young instrumentalists, composers, and ensembles.

Originally from New Jersey, Rhodes was born into a family with Japanese, American, Russian and Romanian roots. After studying at the Juilliard School and the New England Conservatory, she co-­‐founded the Naumburg Award-­‐winning ensemble Trio Cavatina, served as artist member of the Boston Chamber Music Society and performed extensively with Music from Copland House, the Chamber Music Society of Lincoln Center, the East Coast Chamber Orchestra (ECCO), Orpheus Chamber Orchestra, and Musicians from Marlboro.

Rhodes has a vision for commissioning and programming contemporary music: her partnerships with composers of today have resulted in over 100 premieres. As a member of the Takács Quartet, Rhodes has shaped the Graduate String Quartet Residency at the University of Colorado. At the Music Academy of the West, Santa Barbara, Rhodes leads an intensive summer string quartet seminar with the Takács Quartet. When not travelling, Rhodes serves as Artistic Director of the Denver/Boulder branch of “If Music Be The Food…”, a concert series designed to build partnerships through music in order to raise awareness for food insecurity in local communities. 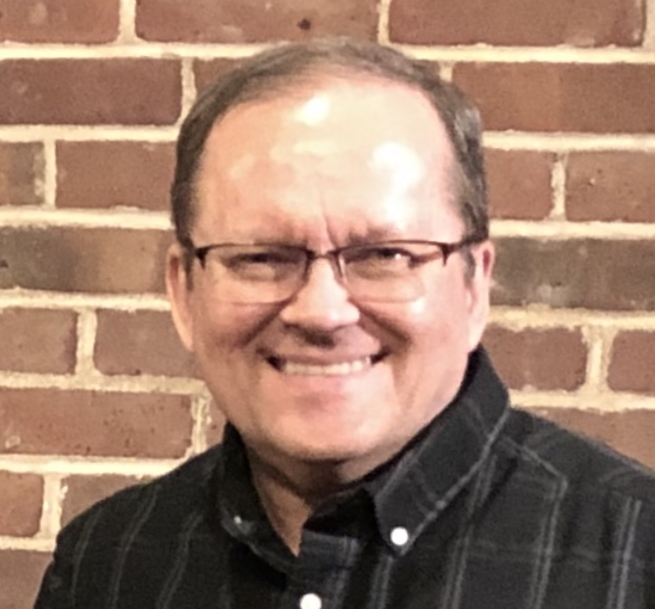 earned bachelor’s and master’s degrees in guitar performance from University of Cincinnati College-Conservatory of Music and Arizona State University, respectively. He has been a regular member or guest lutenist and viola da gambist with many Early Music ensembles in the Southwest, such as Musica Dolce, Helios, and Musica Sonora, as well as a soloist on guitar, viola da mano, and lute. After moving to Denver from Phoenix in 2016, Scott has concentrated on lute duet and lute/viol repertoire and has performed with the Colorado Chamber Players and on other Happy Hour Concerts. Sharing the subtle beauty of Early Music with new audiences and aficionados is his driving passion. 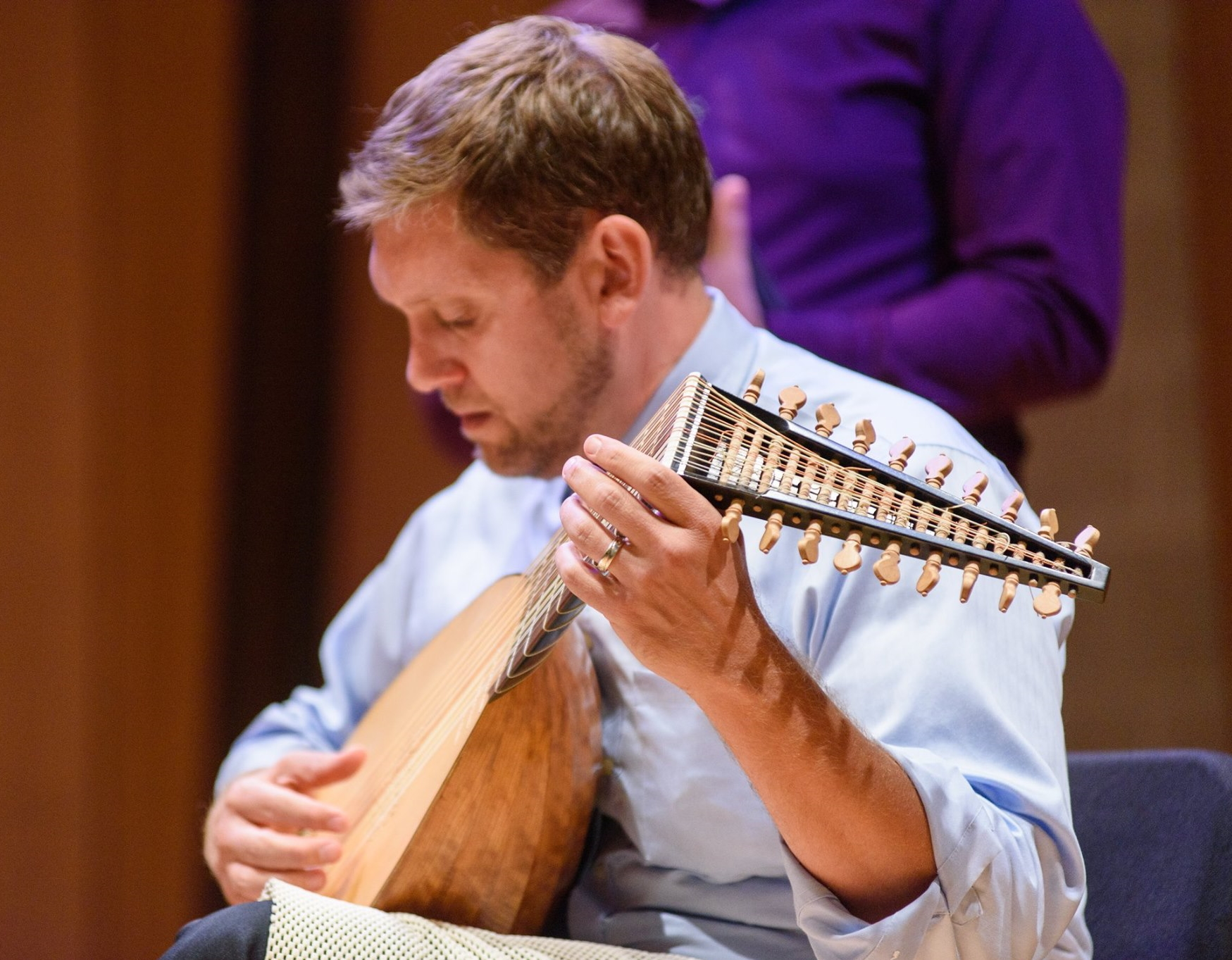 is Professor and Chair of the Department of Music at Metropolitan State University of Denver. He teaches courses in music history, world music, music appreciation, and the history of Rock and Roll. He is the founder and director of the MSU Denver Early Music Ensemble. He earned a Ph.D. and MA from Indiana University in musicology, and has a BM in performance from California State University Sacramento where he studied both classical guitar and lute. He currently performs on the lute, theorbo, and Baroque guitar, regularly appearing with the Baroque Chamber Orchestra of Colorado and the California-based ensemble Sinfonia Spirituosa. He has also performed on period instruments with the Colorado Music Festival, Seicento Baroque Ensemble, Colorado Chamber Players, and the Denver Early Music Consort. As a musicologist, he has published articles on the music and career of composer Henry Cowell, and he has presented papers on a variety of topics at international, national, and regional conferences of the College Music Society, the Society for American Music, and the American Musicological Society.